The Swiss village of Etoy has been a closely guarded secret in the European corporate world, but its strong dual advantage is about to become regional news…

Etoy is not somewhere you’ll find on the cover of a glossy travel magazine. Situated between Geneva and Lausanne, in the tranquil district of Vaud, the humble Swiss village is home to 5,000 people. Over the past couple of decades, its green fields dotted with grazing cows have given way to outlet malls and furniture warehouses. Oh, and the business bases of several large corporations…

Chiquita, Ferring Pharmaceuticals and SUNSTAR have all set up gleaming, glass-walled hubs here, recognising the competitive advantage of being based between two major Swiss cities. A 35-minute drive from Geneva airport and a 15-minute drive from Lausanne, these companies are choosing two cities instead of one. And so is Regus, with the imminent opening of Regus Etoy iLife City. 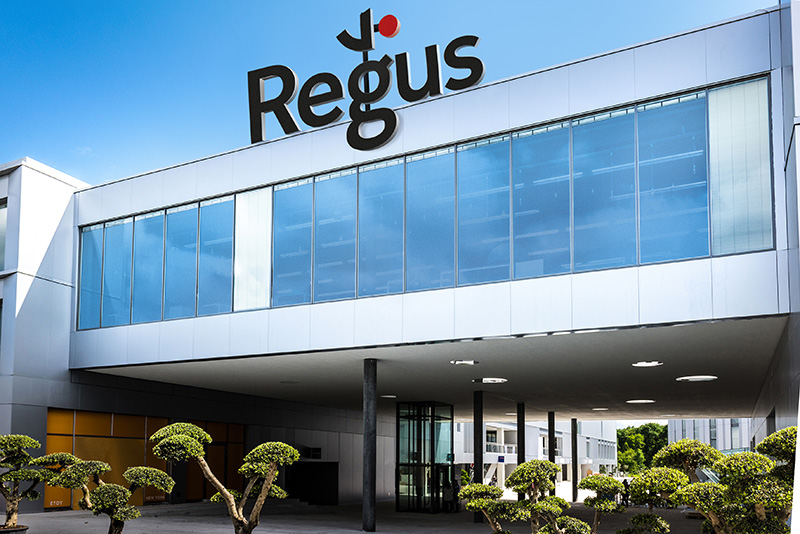 “We are in an area called Littoral Parc, where you’ll find several big international companies, who have created headquarters here for more than 200 employees,” says Henri Lababsi, the Regus Area Sales Manager and Team Leader for Vaud. “We are just next to the highway, and we have a free car park, which is really convenient because in Geneva and Lausanne it is expensive to park and difficult to find a spot.

The sheer size of Regus Etoy iLife City reflects how fast the tiny village is gaining momentum as an outer-city business and research hub. Just 5,000 people live in Etoy – yet the new Regus centre has a whopping 5,500sq m of flexible workspace, with 800 workstations, to meet demand (a typical Regus Centre is around 130sq m). A major selling point for international organisations is the easy access to École Polytechnique Fédérale de Lausanne (EPFL), a world-leading university and research institute that specialises in natural sciences and engineering. Companies keen to make use of the facilities and brainpower of this institution want to be near Lausanne, but they need the space and lower costs that come with being outside of a major city.

Based in the iLife City complex – complete with its own shopping mall, crèche, gym, restaurant, bakery, school and dry cleaners – the businesses moving in to Regus Etoy iLife City will enjoy the benefits and convenience of being based in a commercial area, with the option to whizz down the highway to a major Swiss city (north or south) for networking, meetings or a bit of cosmopolitan buzz.

Back in Etoy, though, the iLife City building is a destination in itself – an aspirational spot for Vaud coworking. “When you enter there’s a huge, 15-meter-high hall with a glass ceiling,” says Lababsi. “On the ground floor, it’s classic Regus – you’ll find offices from 7sq m to 24sq m. And then, when you go to the upper floor, you’ll find something you won’t find in any other business centre in Switzerland with customisable offices from 47sqm to 240sqm in size."

Lababsi is referring to a truly flexible perk of Regus Etoy iLife City. Of the four floors of sleek, contemporary workspace, the top floors have from 900sqm  to 1’300sqm of completely customisable space for corporations. “A client can build their own office separations and say: ’OK, I want a meeting room here, I want an office here,’ which is more complicated to do in other Regus centres,” he says. The centre’s generous event space is another attraction for large corporations looking to host clients and business partners. “We have eight meeting rooms and a 350sq m business lounge – the biggest in the area – that can be transformed into an events area for 120 people theatre-style, or 200 people for a cocktail reception,” says Lababsi.

Aside from offering ahead-of-the-curve office space in Switzerland, Regus helps corporations build their international profile. Being a Regus tenant means being able to plug into something bigger than just one dedicated centre – employees can also drop in to Regus’s 3,400 locations all over the world and build connections with its community of 2.5 million people (meaning those based at Regus Etoy iLife City will also be able to use the workspace at Regus’s Geneva and Lausanne locations). There’s also the option to open a virtual office in Switzerland at Etoy – companies can make it their local business address without physically being there, where all mail and phone calls will be handled for them by on-the-ground Regus staff.

Choosing flexible office space over conventional office space also lets corporations upscale or downscale the amount of space they’re using in line with changes to their business outlook. And, rather than being locked into a long-term lease that no longer suits their needs, Regus locations offer shorter leases, meaning corporations can be more agile in the way they use their workspace.

Find out how Regus can help your business

Why Regus makes the ideal HQ for my business

Investing in virtual offices is key to unlocking growth in Malacca