Embrace automation: the robots are alright

The general consensus seems to be that the robots are coming… to take our jobs. A major report from The Organisation for Economic Co-operation and Development(1) has analyzed the impact of automation on the world of work and suggests 14% of all human-held positions have a high chance of being replaced by machines.

The study of 32 countries concludes that 1% of those jobs will be lost in the USA and 32% of roles will be transformed and require significant worker retraining.

However, before we begin prophesying doomsday scenarios of mass unemployment and the end of the working world as we know it, it’s not necessarily all bad news. Technology has tended to create more jobs than it has destroyed, and automation, if properly regulated, could liberate workers. Here, we examine the trend and its implications.

What do we mean by workplace automation?

Put succinctly, it refers to artificial intelligence (AI) and advanced robotics performing tasks once carried out by humans.

Current-day examples include self-service check-in desks and ePassport gates at airports, or car factory assembly lines such as at Nissan’s super-efficient Sunderland plant in the UK(2), where robots and humans have worked in harmony for years.

Analysts argue that we’re on the cusp of a far greater revolution, where the sort of deep thinking displayed by IBM’s Watson or collaborative efforts of machines such as Rethink Robotics’ Baxter maximize manufacturing efficiency and decrease production-line costs.

What will be the impact of automation?

Taking the UK as an example, a report from the Bank of England(3) says productivity is at its lowest level since the 18th century, leading robotics experts to appeal for investment in automation to enhance efficiency.

The impact of increasing automation means industries such as manufacturing and healthcare could work faster and for longer. Imagine sending a human workforce home at 5pm and switching to machines for a 24-hour operation to double production-line output or reduce hospital waiting times and free up beds.

Another driver for automation is its potential to strengthen economies by bringing home manufacturing previously sent overseas – something companies such as Adidas(4) have already embraced.

When it comes to countries welcoming a robotic invasion,(5) South Korea, Germany and Singapore top the list. China lags behind as much as the UK,(6) where there has been an abundance of lower-cost human labor, although that tide is turning.

The current world average is 74 robots for every 10,000 human employees, according to the International Federation of Robotics (IFR). As a comparison, South Korea has 631 and the UK 71.

Autonomous intelligence is where it really gets interesting, however. This means machines such as self-driving vehicles acting on their own. Take autopilot on a plane, put something similar in a truck and hand over the controls to travel all night and deliver goods faster.(7) 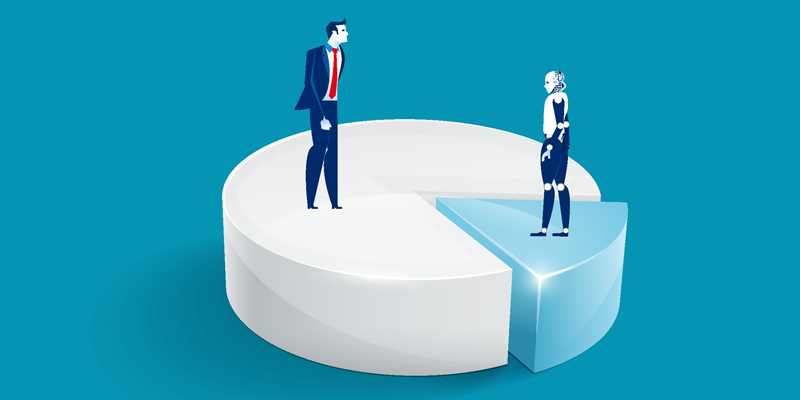 Is automation a good thing or a bad thing?

According to the McKinsey Global Institute, roughly half the tasks carried out by humans can be automated with today’s technology but, crucially, only 5% can be entirely automated.(8)

The idea is to work with machines, not against them, to get ahead in the world and it’s something we’ve done throughout history. For example, combine harvesters in agriculture, or software and spreadsheets taking the stress out of calculations.

Analysts at McKinsey believe new technology means new jobs to leverage it. A New Renaissance Hotspots Report from Chinese tech firm Huawei, in partnership with the Institute of Art and Ideas and futurists Kjaer Global, predicts automation could create 1.47 million new jobs across Europe by 2030.(9)

How could automation liberate workers?

Around 70% of business leaders believe AI has the potential to enable humans to concentrate on more meaningful work, with increased leisure time, according to PwC’s Bot.Me survey.(10)

Its Workforce of the Future report(11) also states some optimists believe that AI could create a world where our abilities are amplified, as machines help us to process, analyze and evaluate data, freeing up time for high-level thinking, creativity and decision-making.

On a different level, using machines to help with manual labor means less heavy lifting and fewer injuries, medical bills and time off as a result. Robots such as SAM the bricklayer(12) could even alleviate a housing crisis by laying bricks six times faster – note that builders are still needed to load the bricks.

Spare a thought for the machines, too. No, really. Among the new jobs predicted in Huawei’s report are rights advocates to ensure the fair treatment of robots.

What skills will count in the future?

Mass redeployment rather than mass unemployment is arguably the biggest challenge if we’re going to offset the 14% of jobs lost to automation. Depending on your disposition, this could present exciting new opportunities to swap or further your career.

Young people entering the workforce will also need to figure out what to do and it could mean the retraining several times during their lifetime. A report on the digital future of work from McKinsey(13) suggests continuous learning will be key.

It sounds rather vague, but McKinsey states “the skills needed to deal with information” will help you adapt to new roles faster. Science, Technology, Engineering and Mathematics (STEM) subjects could also be vital if we’re going to work alongside machines, especially engineers needed to develop and maintain them.

Creative skills, good communication and emotional intelligence are predicted to be in demand, too. “The most successful data scientists are the ones that can tell a story and those who can creatively look at it in new ways. The automated approach doesn’t replace that creativity,” says Martin Duffy, director of analytics at PwC Ireland.

“The world is changing; complexity in society and business growth is changing the future of jobs and skills,” adds Anne Lise Kjaer from Kjaer Global. “Evolving technologies, notably robotics and AI, are driving automation of ever more traditional jobs and rewriting the rules of education and skills.

To this end, individuals as well as organizations will need to adopt a growth mindset and nurture the creativity, agility and lifelong learning skills that will make us not just resilient, but thriving as the world changes.”